While sorting though my RPG collection (you can find pictures on my Instagram and Twitter accounts), I came across a few pieces of homemade terrain I made for a convention game a few years ago1. They prompted me to put this post together. By no stretch of the imagination am I anything more than a beginner at making terrain. Hopefully though, this post will show just how easy it can be. Firstly, I apologise for the quality of some of the pictures. I took all bar the last two on an old Nexus 4 phone while I was building the ruin so they aren’t the greatest quality.

When I started, the only definite in my head was that I wanted to make some sort of ruined altar. The scenario it was to appear in had a Lost Worlds theme. I also came across a large (by 25mm scale) skull in the pet (fish) section of a local hardware store. Perfect as a Kong-style centrepiece – or figurehead you might say… 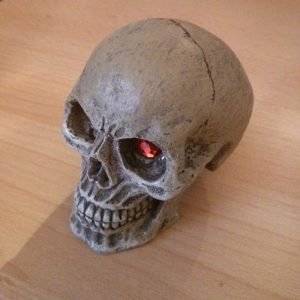 The skull was the only thing I specifically bought for this project. That’s not to say there aren’t other outlays if you try this yourself. I was just lucky enough to have quite a lot of bits I could use.

First up for my homemade terrain I grabbed some polystyrene packaging from a recent kitchen appliance purchase and cut it up into various chunks. From these chunks I played around to get a basic shape that looked good. I knew I wanted a ruined altar but I also wanted to be able to place miniatures on different levels. This left me with a couple of pieces that I didn’t think I could use. I then took a second look and decided they looked enough like wall sections that they could still be used. 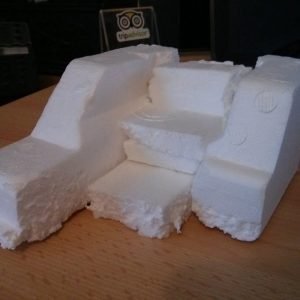 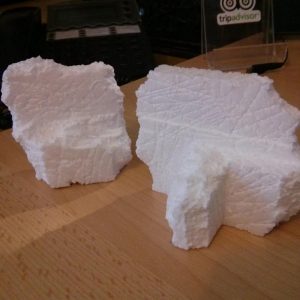 Once I was happy with the basic shape I “pinned” it together with cocktail sticks and white PVA glue. 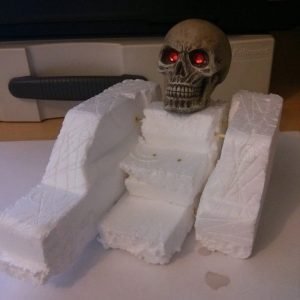 I then slapped on a load of Polyfilla2 all over the main ruin. The added bonus to using a general filler is that it, if you don’t sand it, it keeps a nice, almost natural, roughness. 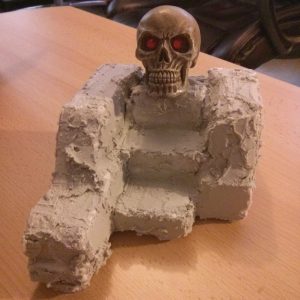 Next up was the painting. I mixed together quite a dark gray and painted the entire thing. I then dry-brushed it all with varying shades of white. Again, the roughness of the filler helped a lot here. 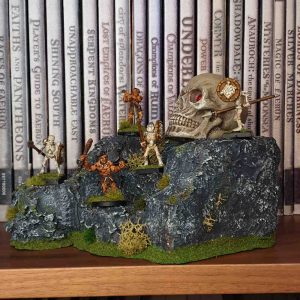 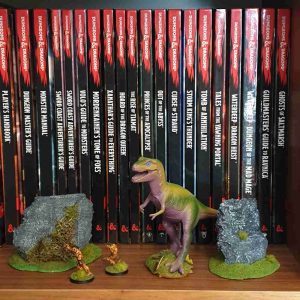 I’m very pleased with how these all turned out and, as the last two pictures (taken just last week) show, they have stood the test of time. I’m especially pleased with the lichen on the ruined wall. It looks like it really is vegetation climbing up the wall.

I painted the skeleton and cavemen minis myself (poorly!) while the T-Rex is a cheap kids toy that I mounted on a base.

So, there we go. My brief run down on creating your own homemade terrain. As I’ve, hopefully, shown, it doesn’t take much by way of bought resources. Have you made any terrain for a game? Post a comment below (if you’re reading this elsewhere, please comment on the origin page so I can respond) and let us all see.

Note: clicking on any of the images will bring up a larger version.

1 By “few” I actually mean 5! Doesn’t time fly?
2 Polyfilla is a “high performance lightweight filler for all general interior repairs”. Other brands are available.

And so it begins... Fortiter Games has a website